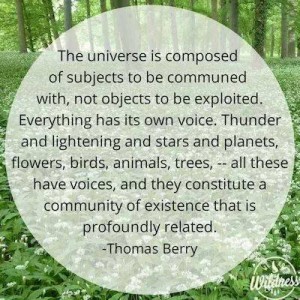 As part of the ECI – European Citizens Initiative for the Rights of Nature, I am co-ordinating a series of events at sacred Sites across Europe (and other parts of the world) which will take place on the Solstices and Equinoxes and other dates leading up to Earth Day 2017. On Earth Day 22nd April 2017, a series of simultaneous events will take place.

If you or anyone you know  would like to be involved with this project them please email me for further information: tiffanystephens7@gmail.com

What is the Sacred Sites Project?

The Sacred Sites project has been created to:

What is the ECI project?

As the destruction of the biosphere continues, we need to establish new legal systems to protect what remains.  In doing so we create a legislative framework in which the natural world’s fundamental active role in supporting all life is recognised . Being a part of nature, we cannot harm nature without also harming ourselves

The highest protection our law gives is in the form of ‘rights’. Rights of Nature is a tradition of advocating legal standing for the natural environment The rights approach is a break away from traditional environmental regulatory systems, which regard nature as property and legalize and manage degradation of the environment rather than prevent it.

Rights of nature laws hold a vision of a world in which our laws facilitate a culture that respects the profound inter-existence of our world and supports healthy relationships with all life. It extends our idea of community to include the whole community of life – a concept also enshrined in the UN’s Earth Charter Initiative.

It creates legislation that honours the law of interconnection of natural systems and allows us to protect nature for its intrinsic value rather than its utility value to humans i.e. being treated as something inert and solely there for human consumption. Creating the frameworks needed to create the ecologically thriving world that all wish to inhabit. .

These laws also empower citizens to protect nature through community ecological governance fostering responsibility and catalysing positive social change. This is why more and more countries are adopting this approach – and why we are proposing that the European Parliament – one of the most powerful political bodies in the world – does the same.

A group of lawyers, environmentalists, academics and others have come together to bring a European Citizens’ Initiative (“ECI”) to call upon the European Commission to make a legislative proposal to the European Parliament and the Council of the European Union to take a rights based approach to environmental protection.

To co-create a world in which our human laws facilitate a culture that:

To ensure that rights of nature laws are adopted by the EU and all of its member states through bringing Citizens’ Initiatives at the European, National, Regional and Local levels.

Recognition of the Rights of Nature

With the enactment of the it’s 2008 Constitution, Ecuador became the first country in the world to codify the Rights of Nature. Articles 10 and 71–74 of the Ecuadorian Constitution recognize the inalienable rights of ecosystems to exist and flourish, gives people the authority to petition on the behalf of ecosystems, and requires the government to remedy violations of these rights.Ecuador is the first country to have adopted rights of nature in its constitution.

Bolivia has adopted rights of nature at the national level and appointed an Ombudsman to deal with environmental issues directly.

In 2012 New Zealand‘s Whanganui River was legally declared a person with standing (via guardians) to bring legal actions to protect its interests, recognising the Whanganui River as a living being with the same rights as a person.

In Costa Rica there is a court ruling that because the second largest reef in the world is a living being, it cannot be commercially exploited.

In Europe, Switzerland recognises the dignity of all beings in its constitution; Spain recognises the rights of Apes; Romania is proposing a law recognising dolphins as rights holders, and even the UK government has publicly stated that animals are sentient beings and not merely commodities

I have listed as a foot note further details of Rights of Nature Recognition and Movements.

The Rights of Nature articles in Ecuador’s constitution are part of a reaction to a combination of political, economic and social phenomena. The principle of “Buen Vivir” or good living, which focuses on social, environmental and spiritual wealth versus material wealth, gained popularity among citizens and was incorporated into the new constitution. Buen Vivir emerged as a response to the traditional strategies for development and their negative environmental, social, or economic effects. , Buen Vivir changes the relationship between nature and humans, eliminating the separation between nature and society

The influence of indigenous groups, from whom the concept of Buen Vivir originates, in the forming of the constitutional ideals also facilitated the incorporation of the Rights of Nature as a basic tenet of their culture and conceptualization of Buen Vivir.  Buen Vivir is an alternative concept of development that focuses on the attainment of the “good life” in a broad sense, only attainable within a community; a community that includes Nature. Part of this concept also emphasizes living in harmony with other people and nature.

The inclusion of “Buen Vivir” and Rights of Nature in the Ecuadorian constitution was ushered in largely due to the increased influence of indigenous activist groups in the political realm.

CONAIE (National Confederation of Indigenous Nationalities of Ecuador), the largest federation of indigenous movements, encompassing 14 of the nation’s indigenous groups, and other groups focused on social justice began lobbying for a new constitution that incorporated recognition of the nation’s indigenous groups, their language, culture, history, and land rights, and inherently their concepts of sumak kawsay, meaning a full life in Quechua and Pachamama (“Mother Nature”)

Buen Vivir has gained new popularity, spreading throughout parts of South America and evolving as a multicultural concept.

Understanding our Connection to Nature

In order to understand the importantance of being connected to nature it may help to look at the connection to nature in the Andes. In Andean Cosmology, there is this idea of kawsay pacha, a living web of energy that connects everything in the natural  world. All things animate or inanimate are buzzing with living energy, this same, all reaching energy.

The people of the Andes interact with the (Kawsay Pacha) the world of living energy through two main spirits, Pachamama (Mother Earth) and the Apus (Mountain Spirits). Pachamama is our earth spirit, she gives us all that we have, our food,  water, our housing. Along with Father Sun (Inti Tayta) and the other sacred elements, Water, Wind, and the Divine Cosmos (Hanqa Pacha). We are in constant exchange with the energies of the cosmos, people, and nature in a give and take that is called Ayni, a sacred reciprocity that works on all levels of life.

Translation from Quechua to Spanish –

Yachay – Wisdom, the impersonal application of knowledge. Shamanic yachay is the wisdom of open spaces.

Whilst the example given here related to the Andean culture, all ancient cultures throughout the world embraced similar principles so these ideas are universal such as  ancient traditions in North America, India, Africa, Asia, Australia, New Zealand and Europe. However, some cultures have been able to keep intact their connections to nature more so than others. Thus brings the need for us all to remember our connectedness to nature.

The Need for Nature connectedness

Research is beginning to catch up with what indigenous rites of passage specialists have      known for thousands of years: Immersion in the natural world brings life enhancing peace, joy, zest, the ability to meet life’s challenges with a positive attitude, and to see the interconnectedness of all things. The external awareness that builds from nature connection will often lead to changes in the internal awareness of people causing them to make choices of life-style and attitude that are necessary to lower the overall ecological footprint of them, their families and their communities.

Even though humans derive many benefits from feeing connected to nature, our modern lifestyles have created a disconnect from the natural environment wherein we spend significantly more time indoors. Some researchers estimate that humans spend up to 90% of their lives indoors. This disconnection from nature can have a negative impact on humans because we are missing out on the beneficial effects of nature. As a result, we are less connected to nature and feel less responsibility to protect this environment.

Schultz describes these three components as:

If an individual feels connected to nature they may be more inclined to care about nature, and protect the environment

Research shows that if humans feel a part of nature and are more connected to nature, they will feel a responsibility to care for nature and protect it and suggests that feeling connected to nature, decreases the likelihood that people will harm it because harming nature would be similar to harming oneself. At the most basic level, we ARE nature. There is no separation. We recognize that humans are part of the tapestry of life on this planet.

If we want to protect our environment and biodiversity, reconnecting with nature is crucial for both children and adults.. We must make sure the next generation also has the opportunity to have meaningful encounters with nature, because they cannot grow to love nature if they do not experience it and they are the environmental stewards of the future.

The Sacred Sites Project and ECI project will be run across the whole of Europe – as it is a citizen’s initiative we need citizens to actively participate in the process.

If you would like to organise an event at a Sacred Site in Europe or another part of the world in relation to our reconnection to Nature, as part of this initiative, please contact Tiffany Stephens – tiffanystephens7@gmail.com

ECI – European Citizen’s Initiative for the Rights of Nature Project

If you would like to be involved in the European Citizens Initiative, Mumta Ito can be reached at mumtaito@gmail.com.