The Spirit of the Hummingbird 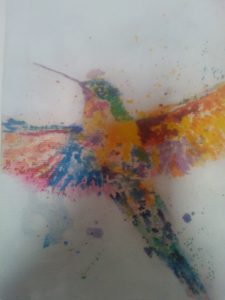 Another aspect of the spirit of the Hummingbird is to teach us how to live in joy and to drink from the nectar of life. In the Munay Ki the Hummingbird is one of the archetypes with which a relationship is built. The seed of the Hummingbird’s essence is implanted in the Solar Plexus, the centre of our inner Sun. Here the Hummingbird connects us with the ancient ones, Grandfathers, Grandmothers, ancient memories and ancient wisdom which becomes awakened within us. 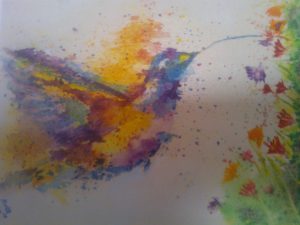 A few years ago I was taking a journey to visit my Grandmother on the Isle of Wight. It was December and as I set out from Glasgow on the train the snow began to fall. It snowed all the way to London which had come to a standstill by the time I arrived. The buses were not running and I had to walk with my luggage and bags of gifts for 45 minutes to stay with a friend for the night. The onwards journey from London to the Isle of Wight involved a 2 hour coach journey followed by a ferry. My friends were telling me I was mad to attempt the journey. I tuned in and the Hummingbird told me loud and clear that I should go. So I set out the next morning, the journey was seamless, the roads had been ploughed, we arrived at the harbour early, I took an earlier ferry than planned and arrived with no difficulty at all. The Hummingbird inspires us to undertake the impossible journey in all aspects of life.

In Mexico, in the ancient nahuatl language the Hummingbird is known as ‘Huitzilin”. In the Mexican tradition, Huitzilopochtli: means several things: it is the ‘hummingbird that flies to the left’, the principal deity of the Mexicas; it is the rising Sun; it is the energy that removes all thorny obstacles from the path, bestows the strength to persevere and bring all projects to fruition; it is also the one who is equipped with both discipline and willpower. 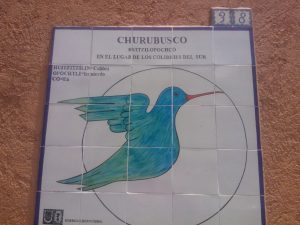 More recently, in Mexico I was trying to find a building I had been to before but had forgotten how to access the entrance. I asked someone in the street and they sent me in a direction I felt sure was wrong. At the next junction I corrected my course to return back via a different road to where I felt I should go. On the corner of the street, as confirmation, was a mural of a Hummingbird, I followed that road and soon found my way to the intended destination. 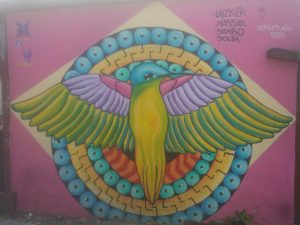 So Huitzilin, the hummingbird, a tiny bird that can fly even though its wings are so short that flying should be impossible, from a purely aerodynamic standpoint, is also considered, in the Mexica tradition, to be the ‘bird of the impossible’, the energy that can make us overcome all sorts of difficulties. It is also the only bird capable of flying backwards and whose purpose is to evoke in us the same powers that it possesses: the power of discipline and willpower, to be able to do anything we wish in our life.

Call upon the Spirit of the Hummingbird to overcome the impossible and bring joy and sweetness into your life.